All you need to know about.

Football is a sport in which there are more and more high intensity actions, both acceleration and breaking.

This evolution in the game caused by the tactical improvement of the player, obliges the physical trainer to evolve in his training systems to provide the player with the best physical resources, so that he can manage them according to the demands of the game, our objective must be that the physical condition of the player is never a limiting factor, and we must assume that the higher it is, the more tactical-technical resources he can use to be able to better manage the spaces in his favor, and have more time than his rival to decide.

Within this need to improve high intensity braking actions, inertial machines appear, initially they come from the health field to correct the problems of astronauts in weightlessness, and later they began to be applied in sports training to improve these braking actions. It is important to note that working with this type of machinery is totally different from what we can do with traditional eccentric work, in which we move a very high weight in the vertical plane at a very slow speed for a long period of time compared to any sports action. It is essential to understand how the different tools work to get the best out of each one for the benefit of our player.

Understanding the functioning of an inertial machine and being able to get the most out of it with our athletes involves understanding the following graph, which will vary greatly depending on the athlete, the load …… but which will always respect the same pattern.

The athlete moves with the load

Speed of the load in gravitational work

While in inertial machines this concentric-eccentric transition is totally different. In inertial machines only the athlete changes the direction of his displacement in the concentric-eccentric transition, the load continues to rotate in the same direction throughout the whole concentric and eccentric cycle. For this reason, in these machines, what really happens is that in the concentric phase there is an acceleration of the flywheel from 0 at the beginning, and a braking phase in the eccentric phase until the flywheel stops.

This huge difference in load speed is what determines that the objective of the inertial machine is the improvement of the braking capacity, since during the eccentric phase we will have to brake the entire rotational speed of the flywheel that we have been able to accelerate during the concentric phase, so with these devices what we are going to be able to train and reproduce is the ability to accelerate and brake, different sports actions and gestures. 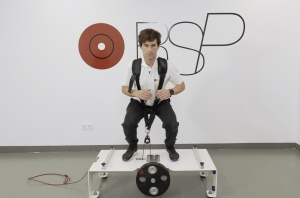 The athlete does not displace the load on the inertial machines

These high-intensity acceleration-braking transitions are decisive actions for the footballer’s performance since they have a direct relationship with the management of space and the movements of the players, both of our own team, and of the rival team in a continuous fight for space.

The result of these interactions between footballers is determined by a high-intensity acceleration action to overcome the rival and arrive before him, and then a phase of maximum braking intensity to gain the opponent’s back and space to progress. Generating in this way the greatest possible number of favourable scoring chances for our team, and making it as difficult as possible for the rival team to advance to our goal. 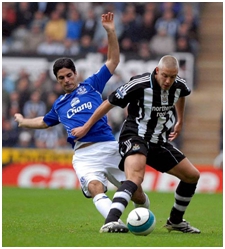 Once we have defined how the concept of inertial machine can help to improve fundamental aspects of the footballer’s performance, we are going to explain the two types of inertial machines that we can find, and the different work orientations that they will offer us:

Fixed radius machines are machines with a linear response to the athlete’s application of force, they have a more structural orientation at the muscular level since the tension time is greater due to their slower speed, these machines incorporate a reduction system to further increase this tension time on the 1 × 2 rope that facilitates the acceleration of the steering wheel to generate a more intense braking phase (start braking with a higher rotation speed).

Conical pulleys on the contrary, are machines with a much greater acceleration capacity since the conical shaft acts like the gear change of a car, facilitating acceleration from the beginning to reach a much higher rotational speed that later we will have to manage in the eccentric phase. The characteristics of the shaft and the flywheel are those that will define the response of the machine to the application of force by the subject.

As you can see we place great emphasis on the word accelerate because that is the key to being able to really undergo intense braking and not confuse it or mix it with resisting a heavy load. To brake the first thing you need is to accelerate and the more we accelerate the more we will have to slow down, the better relation between both of these actions, the better athletes we will be.

HOW CAN WE ADJUST THE LOAD?

As we have commented, what the different adjustments are going to do is modify the response of the machine to our application of force in two ways: 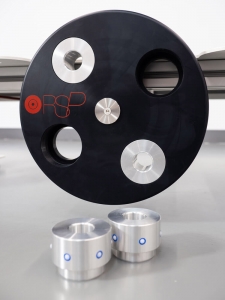 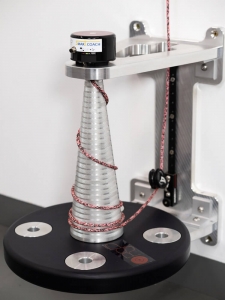 The greatest virtue of a conical pulley is to achieve load accelerations much greater than those that the athlete could generate without this tool, allowing us to generate intense braking situations with great safety, since this intensity only manifests itself in the first moments of the eccentric phase , which then the axis itself facilitates braking by doing the same function of changing the gears as in our car.

The conical pulleys have a much more specific orientation to the sporting gesture by allowing us very high accelerations of low loads, where all the complexity is given by the speed and by the acceleration, not by the magnitude of the load.

As we have seen, inertial machines serve to improve the soccer players´ braking ability, helping him to increase his performance in the high intensity braking actions typical of football. Thanks to the two types of devices (fixed radius machines and conical pulleys), we will be able to generate adequate stimuli that facilitate, on the one hand, the structural development of the football players current demands of the competition, and on the other hand, we will be able to train specific actions typical of the game in which knowing how to vary the speed of the ball and the footballer indistinctly will help us achieve the goal of scoring one more goal than the rival.

RSP uses Cookies to personalize the content and to make our site easier to use. We also share information with third parties in order to analyze visits. You can expand with More information.

We may request cookies to be set on your device. We use cookies to let us know when you visit our websites, how you interact with us, to enrich your user experience, and to customize your relationship with our website.

Click on the different category headings to find out more. You can also change some of your preferences. Note that blocking some types of cookies may impact your experience on our websites and the services we are able to offer.

These cookies are strictly necessary to provide you with services available through our website and to use some of its features.

Because these cookies are strictly necessary to deliver the website, refuseing them will have impact how our site functions. You always can block or delete cookies by changing your browser settings and force blocking all cookies on this website. But this will always prompt you to accept/refuse cookies when revisiting our site.

We fully respect if you want to refuse cookies but to avoid asking you again and again kindly allow us to store a cookie for that. You are free to opt out any time or opt in for other cookies to get a better experience. If you refuse cookies we will remove all set cookies in our domain.

We provide you with a list of stored cookies on your computer in our domain so you can check what we stored. Due to security reasons we are not able to show or modify cookies from other domains. You can check these in your browser security settings.

These cookies collect information that is used either in aggregate form to help us understand how our website is being used or how effective our marketing campaigns are, or to help us customize our website and application for you in order to enhance your experience.

If you do not want that we track your visit to our site you can disable tracking in your browser here:

We also use different external services like Google Webfonts, Google Maps, and external Video providers. Since these providers may collect personal data like your IP address we allow you to block them here. Please be aware that this might heavily reduce the functionality and appearance of our site. Changes will take effect once you reload the page.

The following cookies are also needed - You can choose if you want to allow them: